RICHMOND, Va., Nov. 13, 2018 /PRNewswire/ -- Caregivers in the United States are getting younger and continue to struggle with stress and depression, no matter what their age, according to Genworth's Beyond Dollars Study 20181 released today. 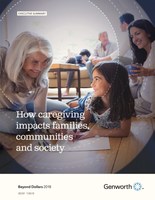 Genworth has conducted the Beyond Dollars Study about every three years since 2010 as part of its mission to help families prepare for the challenges of growing older.  The study documents the emotional, physical and financial impact of caregiving on families beyond the cost of long term care services, which Genworth tracks in its annual Cost of Care Survey.

Among highlights of this year's Beyond Dollars Study:

"Caregiving is a role that most people aren't prepared to assume," said David O'Leary, President and Chief Executive Officer of Genworth's U.S. Life Insurance division. "It can exact an enormous physical and emotional toll, affecting relationships, careers and the caregivers' own health, but it's particularly acute for families who haven't planned ahead for the potential of needing long term care.  By calling attention to the impact of caregiving on families, we hope to encourage them to consider 'what if' long before a crisis arises and disrupts their lives."

In addition to mental health issues, the Beyond Dollars Study found that caregiving can have an impact on other aspects of caregivers' lives:

Health
The stress of caregiving can put family caregivers' health at risk: 46 percent of caregivers reported that a long term care event negatively affected their health and well-being

Family Relationships
The time, energy, and resources devoted to caregiving can also detract from the ability of caregivers to care for their immediate families, according to the Beyond Dollars Study:

Family Finances
Caregiving often comes with significant financial costs.  On average, caregivers spend $10,400 on out-of-pocket expenses, and most caregivers did not plan for the additional expenditures and the additional strain it put on their lives:

Careers
Half of respondents (50 percent) reported that their caregiving responsibilities also affected their careers:

"As difficult as it is to talk about the potential for needing care, it is incredibly important for families to start having those conversations with loved ones and making plans for the future," said Janice Luvera, Genworth's Chief Marketing Officer. "Planning well now helps ensure that people will receive the care they need, how and where they wish to receive it, and reduces the stress of caregiving for those who love them."

Planning Resources
Planning well in advance expands the choices available for care later as people grow older.  Following are resources that can help with the planning process:

Genworth conducted its latest Beyond Dollars Study in February 2018. The initial research population included 7,421 participants, which was narrowed down to 1,200 qualified individuals. They included 739 people providing long term care to loved ones (caregivers), 351 care recipients and 110 family members with detailed knowledge of a long term care event in their family (but not responsible for providing care).

Caregivers were evenly split between male and female, challenging a commonly held assumption that women are the predominant caregivers. Their average age was 47 and 60% were married.

Care recipients were predominantly women at 63% with an average age of 66 and 36% of them were married.

Click here to read the Executive Summary of Genworth's Beyond Dollars Study 2018.

About Genworth Financial
Genworth Financial, Inc. (NYSE: GNW) is a Fortune 500 insurance holding company committed to helping families achieve the dream of homeownership and address the financial challenges of aging through its leadership positions in mortgage insurance and long term care insurance. Headquartered in Richmond, Virginia, Genworth traces its roots back to 1871 and became a public company in 2004. For more information, visit genworth.com.

From time to time, Genworth releases important information via postings on its corporate website. Accordingly, investors and other interested parties are encouraged to enroll to receive automatic email alerts and Really Simple Syndication (RSS) feeds regarding new postings. Enrollment information is found under the "Investors" section of genworth.com. From time to time, Genworth's publicly traded subsidiaries, Genworth MI Canada Inc. and Genworth Mortgage Insurance Australia Limited, separately release financial and other information about their operations. This information can be found at http://genworth.ca and http://www.genworth.com.au.